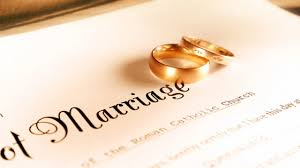 You have probably heard of the following: Divorce rate is just as high in the church as outside.  Most marriages are unhappy.   Living together before (or even rather) getting married is now considered conventional wisdom.  Relationships will only work when you're "happy".  These are the common beliefs about marriage in our culture today, leaving most people feeling discouraged and even hopeless that their marriage can't survive the "valleys" that life brings.

How would things change in your marriage though if these "beliefs" were actually only myths?  God's design for marriage in fact works and you can actually have a thriving relationship with your spouse for as long as you live!  Check out this short summary of some encouraging research about marriage from the book The Good News About Marriage:

#1 The divorce rate has never been close to 50 percent!  There is no way to nail down one final divorce rate.  However, accoding to the Cesus Bureau, 72% of people today are still married to their first spouse.  And among the 28% who aren't, a portion of those marriaged ended in widowhood, not divorce. The current divorce rate is more accurately at 20-25%.

#3 The divorce rate in the church is not the same as the rate among those who don't attend worship services.  The common belief to the contrary is based on a misunderstanding of the well-known George Barna studies.  The reality is that every study that has been done has found that those who act on their faith by attending worship services, praying with their spouse, and so on are happier and closer in their marriage.  Studies find that the rate of divorce drops 25-50 percent among church attenders.

#4 Most marriage problems are not caused by big ticket issues, and simple changes can make a big difference.  Most marriage problems are caused by day-to-day misunderstandings, unintended hurts, and trying hard in the wrong areas.  82% of the time in marriage conflicts, one partner is just simply unaware of the other spous's unhappiness.  Awareness is a relatively easy problem to fix compared to an affair, addictions, etc.

Be encouraged!  Divorce is not the greatest risk to marriages, discouragement is.  Don't give up, your marriage can thrive!  Find out more here