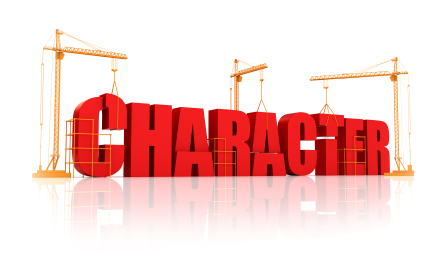 One of the ways God shows His grace is by using His power and presence to build character into our lives.  Character is the mettle and grit that empowers kids to face life's challenges with confidence.  Character is like the studs, joists, beams, and tie downs in houses that give it strength to take on all of the harsh elements that work it over year after year.  Character is best transferred to a young person's life by the example of someone with whom he or she has a heart connection with.  So when a young person sees their parents, uncle, leader, etc. apply character in their life--especially during the "harsh elements"--the easier it is for the young person to develop these traits in their own life.

Here are six necessary character traits to instill in our children:

1. Faith--Becomes a character trait when what we believe starts making moral choices for us.

2. Integrity--is the moral clarity we depend on to do the right thing even when no one is looking.

3. Poise--God's presence in a person's life helps him or her remain focused, thinking clearly, and persevering through the ups and downs of life.

4. Disciplines--Train tracks confine a train, but in so doing, empower it to do an enormous amount of good for people and the marketplace.  A train that leaves it's rails is called a "train wreck".  Train wrecks are a mess and so are the lives of people who dont have disciplines built into the core of their character.

5. Endurance--The world is full of quitters.  Young people need to learn to keep going when everyone else would have long given up. (1 Cor. 9:24-27)

6. Courage--Fear and worry snuff out faith! Much of our efforts in keeping our kids safe or attempting to reduce risk has reinforced the idea that fear and constant worry is normal for Christian.  We must help our kids move beyond their weaknesses and fears to become everything God has called them to be!

"Grace assumes that children will struggle with wrong behavior, but doesnt overreact to it.  It corrects it as it goes along, but it's true focus is on building character into the child's heart--deliberately and patiently..." -Dr. Tim Kimmel